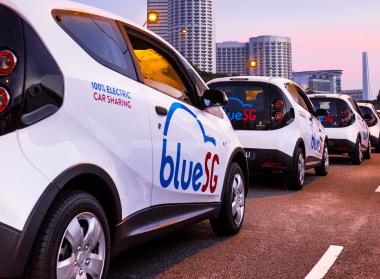 3          Interested parties can sign up and register on www.bluesg.com.sg. The first 1,000 to confirm their subscription by 11 December 2017, will enjoy special incentives offered by BlueSG.

4          “In preparation for the public launch, we are in the midst of finalising the BlueSG mobile app, which can be downloaded on the App Store and Google Play from 5 December. Users can book their Bluecar via the mobile app and rentals will be charged based on duration instead of distance. We are excited about the impending official launch in Singapore, as it is the world’s second biggest electric vehicle car-sharing programme after Paris. We are eagerly looking forward to the residents of Singapore embracing and enjoying the benefits and convenience of the BlueSG service,” said Franck Vitte, Managing Director, BlueSG.

5          As part of the BlueSG programme, a total of 30 BlueSG stations offering 120 charging points, will be rolled out island wide by end of this year. Of the 30 BlueSG stations, 18 are located in public housing estates including Tampines, Bishan and Punggol, while 10 stations are situated in the city-centre and its fringes, and 2 others within the industrial and commercial estates at one-north and the Science Park.

For more information on BlueSG and upcoming developments, visit www.bluesg.com.sg.

Publicly traded since October 30, 2013, Blue Solutions is the company that manages the electrical storage operations developed by the Bolloré group. By diversifying its historical business of producing paper and ultrathin plastic film, the Bolloré group has become a producer of complete electrical components for capacitors, and now holds over one-third of the global market. With this expertise and 20 years of R&D, the group has engineered electrical storage solutions and batteries that rely on a unique technology, the LMP® (Lithium Metal Polymer) battery as well as supercapacitor technology. The batteries are employed both in mobile applications (electric vehicles) as well as stationary ones (storing electricity for individuals, businesses, local governments, etc.) developed and sold by other group entities through Blue Applications, which since 2011 has been rapidly growing on every continent.

NO GAS
+ NO INSURANCE
+ NO MAINTENANCE

A CAR AVAILABLE
WITHOUT ALL
THE COSTS

100% ELECTRIC
= NO NOISE POLLUTION
+ NO DIRECT CO2 EMISSIONS
+ NO ODOR

GET THE LATEST
NEWS ABOUT
THE SERVICE